ATLANTA – As The Posse Foundation celebrates a decade in Atlanta, 10 seniors from Atlanta Public Schools (APS) have been awarded four-year, full-tuition leadership and merit scholarships worth approximately $210,000 each from four of the foundation’s partner colleges and universities, including Bard College, Brandeis University, The George Washington University and Texas A&M University. The foundation named the scholarship recipients during a formal ceremony held earlier this year at The Fox Theatre in Atlanta. 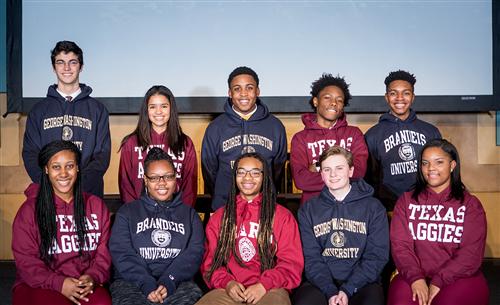 The Posse Foundation, Inc. is a college access and youth leadership development program that identifies, recruits and selects leaders from public high schools. These student leaders are placed in supportive multicultural teams called “Posses” to attend partnering colleges and universities. The 2017 APS Posse Atlanta Scholars are:

“Atlanta Public Schools is very appreciative of the support of the Posse Foundation–Atlanta and the partnering colleges and universities for awarding our students with scholarships that will place them on a path to college and careers,” said APS Superintendent Meria J. Carstarphen, Ed.D. “I continue to be proud of our students who sought after this scholarship to fulfill their dreams and aspirations after high school.”

Since 2007, 144 APS students have been selected by Posse Atlanta and have earned more than $23.4 million in full-tuition, leadership and merit scholarships provided by the foundation’s partner colleges and universities. APS students go through a multi-step Posse Scholars nomination process, and they receive coaching on meeting scholarship requirements that include maintaining a certain GPA, completing a rigorous application process and excelling in scholarship interviews.

About The Posse Foundation

Founded in 1989 in New York City, the Posse Foundation is a nationwide initiative with programs in major cities across the United States. Posse Atlanta’s main goals are to expand the pool from which top colleges and universities can recruit outstanding young leaders from diverse backgrounds and to ensure that Posse scholars persist in their studies and graduate so they can take on leadership positions in the workforce. Posse scholars receive four-year, full-tuition leadership scholarships from Posse partner colleges and universities. The Arthur M. Blank Family Foundation helped fund the opening of the Atlanta office in 2007.

Atlanta Public Schools is one of the largest school districts in the state of Georgia, serving approximately 52,000 students across 88 schools. The district is organized into nine K-12 clusters with 68 traditional schools, 16 charter schools, two citywide single-gender academies and two alternative programs. For more information, visit www.atlantapublicschools.us , follow us on